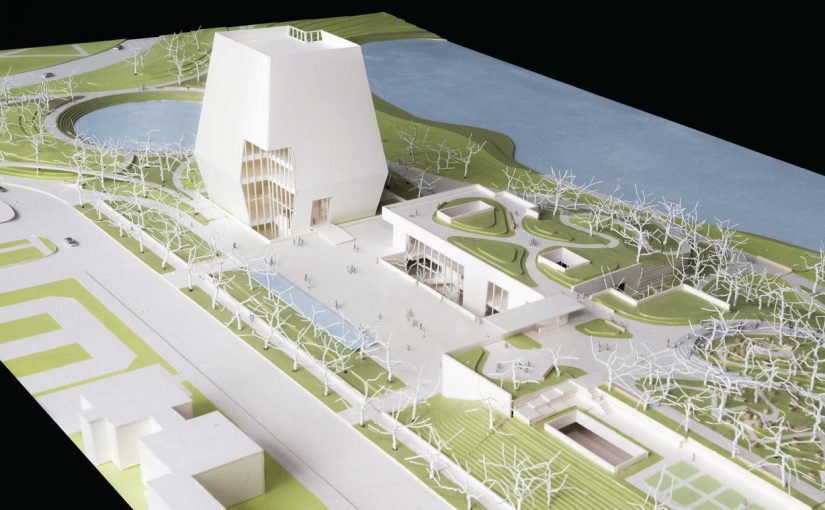 Happy New Year! For this round-up of LIS News, I thought it would be interesting to highlight stories about the construction and conception of the Obama Presidential Library (pictured above). There is a great deal of controversy over the location and what will, or perhaps in this case what will not be included and exhibited in Obama’s library. What seems to be most shocking to some critics is that there are no plans to include physical copies of manuscripts, letters, or documents but will instead have a digital archive. Adam Campbell of Liberty News Now refers to this as “simply host(ing) a digital archive” but as I’m sure many LIS professionals would agree, there is nothing ‘simple’ about digitizing thousands of materials in multiple media formats (paper documents, photographs, born-digital, etc.) so that they are accessible and successfully preserved.

In a column for the Chicago Tribune, Ron Grossman, an Obama supporter, writes that “what brought [him] up short was a space labeled ‘test kitchen.’ Presumably that reflects Michelle Obama’s war on junk food. The museum’s champions similarly suggest it could host yoga classes. President Obama, is that how you want to be remembered? As the healthy-eating and meditation advocating president?” Grossman vehemently disagrees with the concept of the Obama Library and goes on to suggest how he thinks the museum should be designed and what stories it should tell.

I think that this harsh criticism at the thought of a test kitchen and yoga studio being present in a library reflects a larger societal disconnect between how the public and how LIS professionals view the purpose of the institution of the library. For example, the Free Library of Philadelphia (FLP) has a very successful 3-year-old initiative called The Culinary Literacy Center (CLC) located in its central branch. The CLC advances literacy through cooking lessons, nutrition classes, and neighborhood environmental sustainability workshops that are mostly free and available to the entire Greater Philadelphia community.

While the FLP is not part of a Presidential Library and is perhaps not subject to the same scrutiny when breaking from tradition, it is still a major hub in one of America’s largest cities, similar to how Obama’s Library may ultimately serve Chicago. Libraries can be extraordinary centers for community engagement and growth as well as a place of innovation and creation. Rather than following the status quo and more traditional concept of Presidential Museum and Library, the Obama Foundation seems to be more future-focused and it will be interesting to follow this national conversation on what a library should or should not be.

Yoga, basketball and a test kitchen: Obama’s Presidential Library Plans via The Guardian

Please, Mr. Obama, skip the test kitchen and make it a museum via Chicago Tribune

Libraries Under Capitalism: The Enclosure of the Literary Commons via Truthout.org
“Our public libraries, our literary commons, are gradually being enclosed — sealed off to the public by a series of acts of our government — local, state and federal — as it bows to the dictates and priorities of corporations. The public library is one of the few settings where people can enter for free, access materials for free and stay without being expected to buy anything. The value of public libraries not only exists in the materials they lend and the non-commercial model they embody but in the commons that they represent: A public area that offers Americans liberated intellectual spaces, the potential for community dialogues and organizing.”

Libraries and Librarians Aren’t About to Disappear via Inside Higher Ed
“Last month a publication called 24/7 Wall St. published an article titled “America’s 25 Dying Industries.” Using data from the Bureau of Labor Statistics, the article analyzed how employment levels in various sectors changed between 2007 and 2016. The article, which was recently republished by USA Today, Yahoo Finance and many others, ranked libraries and archives as one of the fastest-declining industries in the U.S., second only to video tape and disc rental. The publication of the article prompted a strong response from librarians, who questioned the validity of the analysis.”

To Infinity and Beyond: Skyping with Astronauts via ALSC Blog
“How did one humble library end up with a direct line to outer space? We all know that libraries are about sharing books, movies, magazines, music, and more.  In today’s ever-evolving world, libraries have also become a place where people can gather to share ideas, learn about new topics or technology, and expand their skills.  These thoughts were what propelled me to apply to NASA for an In-Flight Education Downlink a year before the actual event occurred.”

NC Kids Digital Library: PL Directors Launch Innovative New Digital Reading Program Statewide via Knowledge Quest
“NC Kids is a database of more than 6,000 high-quality, high-interest digital books suitable for grades K-4th that are available for checkout through NC Cardinal. Anyone in North Carolina can access this database with a public library card and any device connected to the Internet.”

Hommocks Middle Students Get Real-Time Data on Reading via lohud.com
“We said to ourselves, ‘How can we learn more about the secret reading life of kids?’ said Rob Andrews, an assistant principal at Hommocks. ‘It was kind of a simple idea in the beginning and it’s grown into this tool that has empowered us not only to give teachers access to the secret lives of kids but promote conversations between teachers and kids.’”

2017 Patent Rankings – Hot Off the Press via infoDOCKET
“A record number of 320,003 patents were granted by the US Patent & Trademark Office (USPTO) in 2017—a 5.2 percent increase from 2016…The computing, telecommunications, and medical industries are continuing to receive a high volume of patents. New technologies showing rapid growth include e-cigarettes, 3D printing, and autonomous vehicles.”

Michigan State University Awarded Mellon Grant to Build Slave Trade Database via infoDOCKET
“Michigan State University, supported by nearly $1.5 million from The Andrew W. Mellon Foundation, will create a unique online data hub that will change the way scholars and the public understand African slavery. By linking data collections from multiple universities, the website will allow people to search millions of pieces of slave data to identify enslaved individuals and their descendants from a central source. Users can also run analyses of enslaved populations and create maps, charts and graphics.”

University of Washington Reality Lab Launches via UW News
“The University of Washington is launching a new augmented and virtual reality research center — funded by Facebook, Google, and Huawei — to accelerate innovation in the field and educate the next generation of researchers and practitioners. The $6 million UW Reality Lab, funded with equal contributions from the three initial sponsors, creates one of the world’s first academic centers dedicated to virtual and augmented reality.”